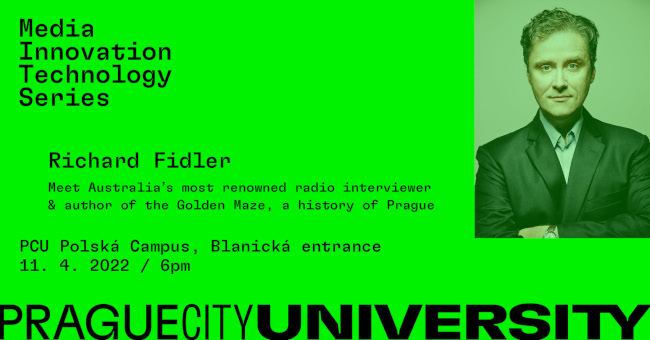 David Vaughan from PCU’s School of Media & IT will be interviewing Richard, the host of Australia’s most successful podcast and radio series, Conversations. Richard will also be launching his book The Golden Maze, a history of Prague.

Richard has had a long and varied career in the entertainment industry. He first came to public notoriety as a member of the Doug Anthony Allstars, a provocative musical comedy-alt rock group who toured Adelaide and Edinburgh Fringe Festivals. They were immensely popular with the Edinburgh crowd which led to regular, comedic television appearances in the UK. On returning to Australia DAAS grew in popularity and eventually landed their own television show DAAS Kapital.

Richard left the group in 1994 to pursue a writing career and occasional hosting gigs on TV. In 2005, he began his career in radio for the national broadcaster, the Australian Broadcasting Commission (ABC).

He is best known for his Conversations program on ABC’s Radio National. The programme is a one-on-one conversation with a local or international guest with a story to tell and is broadcast throughout Australia every weekday and internationally through the Conversations Podcast. It is the most popular podcast in Australia with more than six million programme downloads a month.

Richard has continued to pursue his writing career and has successfully published non fiction works, particularly on history and politics. His latest work – The Golden Maze, is a history of the city of Prague and stretches back to the city’s origins right up to now. The book will be officially launched at this special MITS speaking event.

Richard has a long-held fascination for Prague and its people having made the decision to fly to Prague during the Velvet Revolution to witness the Czech nation emerge from communism. The Golden Maze is the result of years of research, as well as one-on-one interviews with Czech historians and dissidents undertaken during his Prague residency at Prague City of Literature. Since publication, The Golden Maze has been shortlisted for the General nonfiction book of the year at the 2021 Australian Book Industry Awards.

After a 3 year break due to the pandemic we're pleased to announce that Anzac Day is returning to the social calendar!

The day starts at 11.30 am at the Commonwealth War Graves in Prague 3 for the ode and official wreath laying ceremony.

When concluded, everyone is invited to take the courtesy bus directly to VK Slavia Rowing Club in Prague 5.

From 12.30 VK Slavia is exclusively ours. Bring a picnic blanket and lots of cash for food, drinks, a raffle and a voluntary entry fee to help us raise money for SKP Hopo to house and feed several Ukrainian families in Prague 9.

Our entertainment programme features Ella CR, a vocalist who mixes improv and creative looping of voice and music in funk, soul, hip hop, jazz and reggae genres and DJ Little Frank playing funk and soul till the sun goes down.

Plus we will have activities for kids, speeches and fabulous food and drink such as Aussie Meat Pies and Sausage Rolls from the Pie Shop, Aussie Sweet Treats (including homemade Tim Tams!) from new business Sweet Oz, premium Aus and NZ wines, soft drinks and Ferdinand Beer.

Anzac Day is an important commemorative day for Australians and New Zealanders but we encourage ALL nationalities to join, mix and enjoy a day that celebrates our freedom and sovereignty, particularly pertinent given the current political climate and after the last few challenging years!

Coming soon, another outdoor event in May, plus Save the Date for the CANZA Charity Ball… 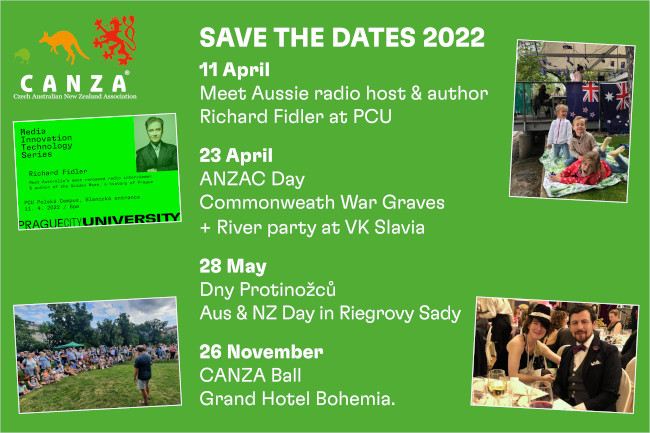 We are very pleased to announce a partnership with CNZBA (the Czech New Zealand Business Association).

The CNZBA is dedicated to encouraging, promoting and supporting reciprocal trade, business and investment between New Zealand and the Czech Republic.

Since its establishment in December 2012, CNZBA has become officially recognized as a bilateral platform helping New Zealand and Czech Republic businesses and business oriented individuals expand their mutual business relations.

The CNZBA is a non-profit membership organisation fostering and protecting interests of its members and prospective members, who recruit from broad range of industries. Membership in the CZNBA is available to every company and individual involved or interested in undertaking trade, investment and/or any other form of legitimate business between New Zealand and the Czech Republic.

The CNZBA works independently, but maintains very good relations with the Czech and New Zealand government delegations and their trade & investment departments.

If you are a Czech business looking to expand into New Zealand (or Australia) or a NZ or Australian business that has recently arrived in town, please don't hesitate to contact us.

CANZA is delighted to announce that it has formed a partnership with Czech Cricket (Českomoravský Kriketový Svaz). Cricket as a sport and outdoor activity is very popular in both Australia and New Zealand with the national men's and women's teams of both countries performing at the pinnacle of the international game. Through the partnership we will be working on two fronts:

1) to help inform Czech-based Aussies and Kiwis that their time in the Czech Republic does not have to be without cricket, with regular senior and junior tournaments being played

2) to help introduce local Czech people to the Australian and New Zealand pastime and our beloved sport, cricket.

Czech Cricket has been steadily expanding since its formation in Prague in 2000. Czech Cricket coordinates and support local international and Czech State schools towards participation in the Czech Cricket Winter, Spring and Summer tournaments, which have been showing fantastic growth since their introduction in 2012. The expansion of these tournaments alongside the introduction of an additional team in the men’s game and a major facilities development overhaul project mean that 2014 is set to be a fantastic year for cricket in the Czech Republic.

If you or any of your friends, colleagues or relatives are interested in learning more about cricket, please contact info@CzechCricket.cz or for upcoming events, please keep an eye on the Czech Cricket website here www.czechcricket.cz/.

Opportunity for business referrals from Austrade

Once approved, the registered company will be listed in the database of potential services providers to Australian companies interested in doing business in Central Europe and/or those already operating in this region.

Get our monthly newsletter   |   Visit us on Facebook   |   Legal information